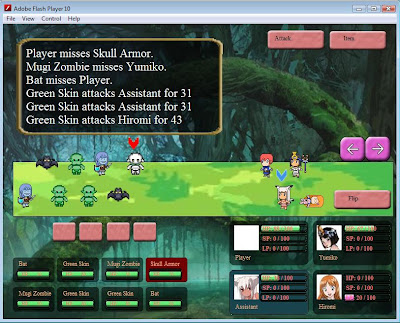 So after fighting it out with objects. A long painful fight at that. I still can't believe that you can't copy objects in flash, and have to premake a bunch of objects or they will all link to the same thing. An example would be helpful. I attack Mugi Zombie and hit for 10points. Every Mugi Zombie on the screen then lost 10 hps... GRRR... got it fixed in the end but drove me nuts for hours. The worse part was that this is how I actually did the girls, but I thought that hey I've been programming flash for 6 more months should be able to do it better now... nope.

So whats left with combat:

1)Remake combat formulas they are hitting extremely hard and the players keep losing badly.
2)More death logic. Players no longer attack when dead, enemies still do. Death should result in flipping and moving of enemies to the front... not yet.
3)Integration of combat attacks for slaves, enemy, and players.
4)More Combat attack effects, the only real UI upgrade still needed.
5)Items... Drag and drop, combat item array, combat items. Anyone feel like making a bunch of one shot combat expendable items, please do.
6)SP generation.

Overall I feel that maybe a week or two before all the toys are in place. Not bad actually. Feeling a January release still possible.

Daisy
Posted by Daisy_Strike at 1:58 PM