Some thoughts on Combat 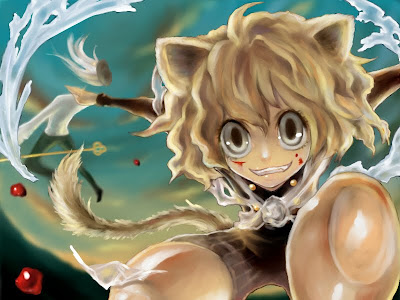 So Combat.. one of the most requested features. To tell you the truth making a combat system is that tough. Sure I will probably need the help of about all the graphic designers on the board to make it look pretty. But the actual creation is rather just math and menus... simple.

The major problem is what comes next, an arena is easy. But the actual world exporation is the difficult part. I want it to be random dungeon exploration with 2 major dungeons (the green and the pit). And there are a few diferent versions that come to mind.

1) The tile system(I'm making these names up btw), where you click from room to room like Slavemaker and that futanari Miko game... which I can't for the life of me remeber. Advantages its the standard flash room exploration, real pain though to do random and its not very first person.

2) The first person shooter dungeon wall version. Go play a really early D&D game or Lightning Warrior Rady and you will get it. Basically lots of repeating walls that you arrow though, and in the end make me nauseous. All the walls look the same but easy to build hard to random.

3) 16 bit the world moves and you stand still. About any normal early final fantasy 16 bit when you move the world holds still. I have no idea really how to implement it. And building a random system would take a while.

4) Big room then another big room then another big room that you arrow through. Think, damn it what was the name of the game where you could be 4 classes and just advance room after room killing mobs and taking there keys, except with random combat in a seprate RPG Combat screen. Probably the one I'm leaning towards randoming it will be easy and easy to change the backgrounds.

Daisy
Posted by Daisy_Strike at 8:02 PM