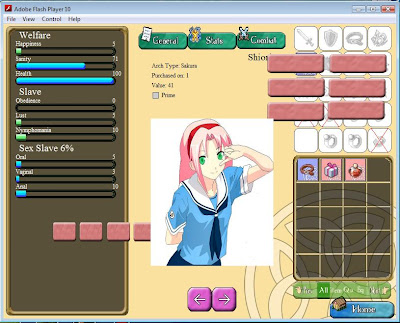 Lonewolf has created a Sakura (the one from Naruto if you counldn't tell). Will be in the next update. Please ignore the odd buttons my build is currently... flumoxed this will be fixed later on.

Speaking of the next update it probably won't be till January. Just too much stuff to try to get up and running to do it in one month. Expect though a few debug combat releases in a week or two as I have you guys pound it over and over.

Did more behavior on death. IF the front row dies you get an auto flip pushing the backrow forward, assuming there not dead too, and flip buttons do not appear when people are dead. Enemies do not target the dead. Enemies though need to have a similar system added to them... which is my next step most likely. Also playing more and more with the combat math.

wow that was a good wall of text for me.

Daisy
Posted by Daisy_Strike at 2:21 PM