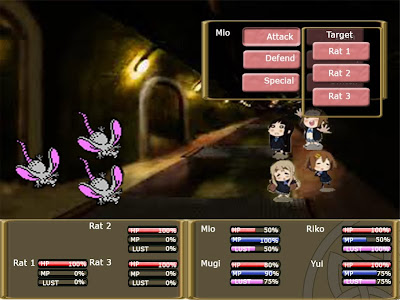 Flagnine's proposed combat screen and very close to what I had in mind. Though I'll probably cheapen out and do a scrolling text screen for the initial versions as it will be easier to program then floating hit damage and status changes which will be in one of the late final versions. Though the large buttons seem rather distracting, not sure if theres a better solution but something to be kept in mind. 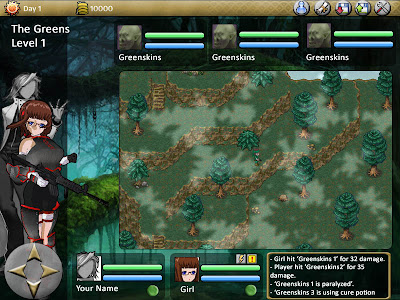 Redcape offers this for the actual exploration screen. I really like the backgrounds and sides, but the exploration is never going to look like that sorry but it would take years to program a map like that for me, and not very random those type of maps are predesigned zelda where everything is thought out and designed to force the players exactly where the programmers want you to go. Not something I think I can or want to do. 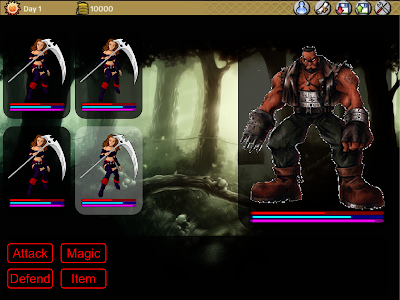 docclox variation I rather like the buttons, definitly a fan of the KISS method. Unfortunatly not sure if I'm a fan of putting the girls health there. My old FF love showing itself that HP/MP should be at the bottom.

Go check out all the variations on the board...

Starting to make me itch towards building the combat system for at least an arena in game. Even if exploration is still a long way off. Don't be surprised if I start floating test math for the combat system on the boards in the next few days. I have an Ac of 6, my opponnet has thac0 of 8 and has rolled a 5, do he hit? Yah I don't remeber how to calculate thac0 in my head any more too... Those of you who don't know your lucky young people. Thinking though that there will be a leveling system for combat that acts like a multiplier to hp and combat skills. Won't matter unless the slave is a combat slave.

Daisy
Posted by Daisy_Strike at 5:33 PM