Moved Combat to Main SWF and The Numbers Game 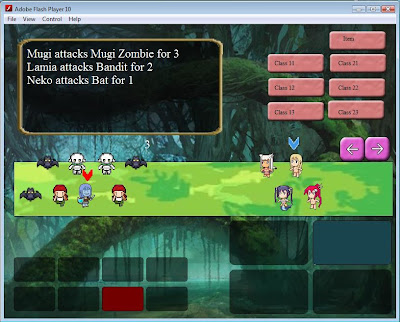 Okay so moved the combat from the little test .swf into the big otherworld.swf. Well actually was hoping to import it in... that didn't work well, at all. After about 3 hours of trying I just gave up on it. The main issues the sprite creation wouldn't work on a remote .swf. Needed to have a multiple same enemies and girls. Also couldn't index on a remote .swf. The combat has 4 layers going at once background, path, sprites, combat effect. They all have to be in the right order or stuff is not seen. So combat is in the main .swf... yea.

You'll note some minor changes to the layout that I made again. Next up item adding, drag and drop on the player or enemy you want to give the item. Special attacks, thinking an object array for these. Still a long way to go before even ready to do the combat math.

(Counting only official Releases)
Broke 25 hundred for last months release and looking good for this months as well. I'm also killing the september and october d/ls not sure why they are still up to begin with.

Have a good weekend,

Daisy
Posted by Daisy_Strike at 3:31 PM