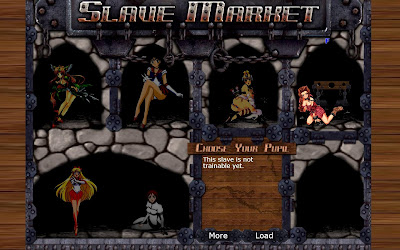 So been playing with the new slave maker update... as a player. Lots of fun new stuff that Cmacleod42 has added as well as finally some new slaves, even if there beta's its nice to see that other people can make slaves. Peach was rather fun, lots of new stuff. Still haven't had a change to pay Aeris. Most interesting to me was that Shampoo was giving warnings of Ms. N events and one of the new assistants I used was using all of Mugi's code... though not updated for personality. Unless the neko, futanari, is a voyeur lesbian as well. But its good to see the code used.