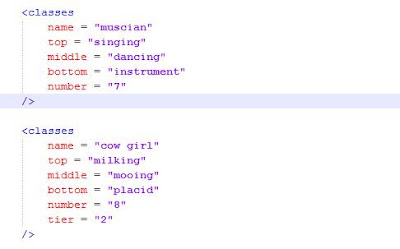 So everyone probably saw this but me... but to make the items in a string equal a class string equal. I need classes in strings... and that requires information. So since I was going to change classes over to xml later on in the next a few updates to allow for community added classes it just seemed faster to do it now then have to rewrite stuff twice. So obviously that was a tangent and the girl point adding is still only about 1/2 way done.

To answer the class questions now, no that is in no way the full xml later versions... which depending on how much head banging is required to fix the bugs this caused will add the float over text and image loaders for the icons.

Stuff I want to XML but people will kill me if I delay the release any further...

I really want to do shops and allow the community to add events and items for sale.

Daisy
Posted by Daisy_Strike at 3:49 PM