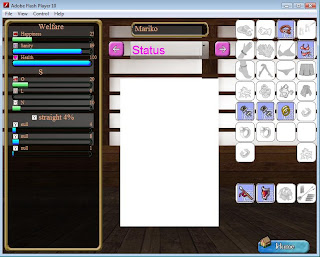 First off I will be releasing bugged versions very soon, probably limited alpha releases (in chat channel) and then general beta releases. I made a mistake with releases and it shows, its much better to do bunch of small releases test it out fix the bugs. Then a large super buggy release. So expect that after this bugging and release cycle to see releases every time I get a new feature added. Not really time based but when there is a new shiny toy there will be a release. Also now that were going more and more xml there will not need to be a release to add new stuff. New girls and new items will be doable with this release by just copy and pasting from the forums.

So items now add stats yay. A bunch of new bugs do to changing classes from ints to strings which I spent a lot of the night pounding down, most of which would have been removed when I xml jobs later on anyways but that would take me a month or two so I think fixing for now is a fine compromise. I started expendables... and then got distracted and forgot to finish them... Oh well.

Redcape has given us the following new head goodness...

Daisy
Posted by Daisy_Strike at 5:42 PM