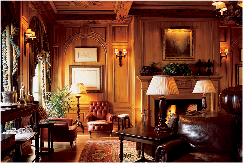 It's been brought to my attention lately do to about a dozen chat conversations that I need to update the bible with more background stories. So when I got nothing else to say that's what your going to get. Be advised there may be spoilers and that will be noted also all of these will be added to the forum.

External Appearance:
Brick building with large windows. A large wooden door at the front with a small sign identifying the club. The club is on the better side or is the best side of the red light district.

Internal Appearance:
Wooden paneling, leather chairs, bookshelves on the first floor. Think about any male club on earth but with out the tacky dead animals. The second floor is off limits to most members as is the basement. A kitchen in the back which serves lunch and dinner.

Founded in year 7 during the government reorganization, what started as a few backroom deals quickly became a way for the wealthy and influential to try to protect that power. Needing a more in the light place the club sort of just flowed out naturally.

Relationship:
Guild membership allows you in the door. Its up to you to get farther then that.

People of Note:
Battler ~ The maitre d' - Don't let him fool you he knows every secret in the club. Rumor has it he is also the true owner.

Sure I forgot stuff,

Daisy
Posted by Daisy_Strike at 3:39 PM