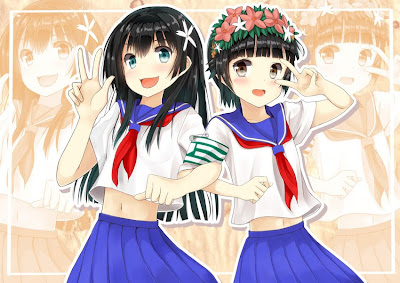 I'm sure I'm forgetting to do something but here is Bugged version 2. My apologies to the editors, I didn't get any time to update your corrections. They will be done before the official release.

As always I ask that this version not be spread around the net since I really don't need the 10 thousand bug reports.

Updated Credits
reported - Is it now possible to raise the housepet skills? 'cause the trainers don't raise it despite using dehumanising training...also wasn't able to find another way to raise it... - fixed earlier
bug - The bottom 1/4 of the "collar name" text is missing in the auction house. - 50 pixels longer - fixed
bug - On the cooking bug a few have commented on, or at least the issue I have encountered is when a girl hits 100% health during the cooking. Seems to set the girls health to that of whoever cooks.Edit: Was using a Lala archtype, but went back and tried with a few others (Menace, Haruhi and Mugi.) with similar results. It also depends on when the girl's shift comes into play, seems like the last shift to take effect is the first girl you bought, while the first is the last girl you bought. So, if all your slaves start a day at 100% health and the last girl you bought makes a feast, all other slaves take a health hit, then their work shift comes into play and they get hit again... - still looks good to me ran through 50 days with girl in the first and the last spot seprately as the cook and health stayed where it should be.
suggestion - I haven't done a lot of combat yet, but the impression I'm getting is that it's going to be way too easy to heal an enemy or clobber one of your own side. A bit more intelligence for the target cursor would be very welcome right now. - good plan... not something going to mess with this debugging
balancing - Having the sick option you basically can't let your assistants decide if a slave should rest because they always go into negative health before an assistant let the rest, but having a negative health ups the percentage of getting sick by a lot. - asssistants should never go sick if you have healing on... if this happens again please bug - sick check is done after rest!
bug - Lamia (I assume this applies to the other assistants as well) isn't recovering health. - moved this around a bit - and its still happening - ... variable was asHp should be asHP... - fixed
bug - Doesn't seem to be anything, outside of combat, that you can do to heal the player, either. - oops - after any shift player should be back up to max hp
reported - click exit and game stops doesn't let me click on anything else afterwords - unable to reproduce
bug - -Upon returning from the Arena (tutorial?), all of your slaves' collars disappear. (I'm not sure if the stat changes disappear with them or not.) - this has got to be a whatGirl stripping bug I thought I had it fixed - whatGirl seems to be accurate... - okay its in the temp array - i think its not actually being added to the girl - okay... fixed - would you beleive the apple bug and the missing collars were the same bug - that took a bit forever
bug - Also,the bad guys keep attacking even though the battle is over. Which may be the intended behaviour, I suppose. - Basically practice shouldn't cause a game over to begin with - new bug if combat is over game crashes - looks like because the timer keeps on going... interesting - fixed remove all timer listeners
reported - This is an old one: if you get the blacksmith to fit nipple rings, and then return to the girl screen at home, you cannot then drag items from the inventory. - this is intended behavior - someday I will fix it so you can drag and drop and hit locked items but right now it is set to stop you from hitting locked items with drag and drop - though drag and drop still works on other items not involved as in this case dresses and collars.

Daisy
Posted by Daisy_Strike at 5:47 AM