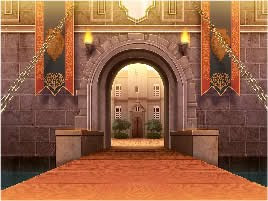 Another day another dollar.

First after answering some questions about the Gentlemen's Club. There are women working in the kitchen but they would never enter the main area.

Futanari Palace
(I am going to use female adverbs for Futanari's rather then gender neutral.)

External Appearance:
A fort, partially completed. Though it looks finished from the front... On the outskirts of the green.

Internal Appearance:
A standard military compound. A large parade ground. A blacksmith. Barracks. Chow hall. Etc. Most of these buildings are snug or inside the walls. Any military fort.

History:
Futanari are some of the most valuable of all slaves, mainly do to rarity. Trained normally as sex slaves, its not unusual for them to be heavily drugged and forced in training that increases libido. This training normally resulted in insanity where they hump anything, at anytime, all day long.

Created in year 14 by Futa Leader, to prevent Futa's from being overly abused as slaves. The quickly became more and more militaristic as peaceful protests resulted in kidnappings(illegal enslavement) and rapes.

Futa's still make up less then 2% of the population. Disappearing into the green with the 50 or so Futa's in the group at the time would have resulted in almost certain death and starvation. So they instead started building there own society on the edge of the green.

Next major issue was money for food and rescuing other Futa slaves. Futa leader realized very quickly that stealing Futa slaves would result in there group being attacked. So they needed money, her followers were also paranoid and arming themselves. And the best source of cash is pulling something out of the pit. The first expedition was a failure. The second a failure. But they learned fast. Now the Futa expeditions of 20 or so Futa's at once are some of the most experienced and successful pit teams in Magmell.

Relationship:
If your a futa they will talk to you. If you aren't they rather hate slave trainers.

While the Futanari Palace faction should be anti slaves. The fact that a large number of there members were trained as sex slaves they have a much increased libido. So they are more anti-futa slaves. All others they are more then happy to fuck. Next to the latrines are usually 2-3 slaves tied and ready for use by any futa at any time.

People of Note:
Tsukasa - An ex-slave, rumors are that she killed her master, who formed the Futanari Palace almost by herself. She is a combat expert, before crawling out of the pit, she was a Centurion, leading a phalanx, who had seen combat. She has organized her futa's with what she knows. So they are almost all spear users. (Yah I'm having fun there). Very military minded.

Daisy
Posted by Daisy_Strike at 3:38 PM