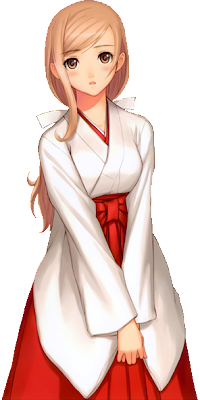 Running a bit late do to Custom Maid so just going to plop in one of the histories I had written up. Expect more tomorrow. Docclox suggested a new variation on the main screen and maybe I will have time to talk about it then, still trying to see if I can do a virgin maid.

Typical Shinto shrine, lots of fox statues. Classic wooden Japanese shrine architecture. Charms, good luck items, can be purchased from a small hut to the side.

The shrine was created by *Noble Fox Miko/demi-goddess*, one of the heroes that defeated *demon*, soon after the founding of Magmell. It sat alone in an overgrown area of the green that would later be pushed back and become temple street. Which more then anything reflects the Inari Shrine's tendency to want to be left alone, and some how always pushed to the front of history. It was *Noble Fox Miko/demi-goddess* spells that provided large bountiful harvests and finally put an end to the lean years. After that she began to disappear more and more and has not been seen by the populace for years.

Some portions of *demon* and other demons are sealed around the shrine.

Quarterly year harvest festivals are held at the shrine.

*Princess Miko* - the daughter of *Noble Fox Miko/demi-goddess* and the King. Also rarely seen in public she speaks for her mother to the other Miko's and only appears during the quarterly festivals as the lead dancer and priestess.

*Miko* - Constantly harassed by Zange. She tries her best to appear calm and collected and constantly fails. If you visit the shrine most likely she is the one who you will meet.
Posted by Daisy_Strike at 10:27 PM