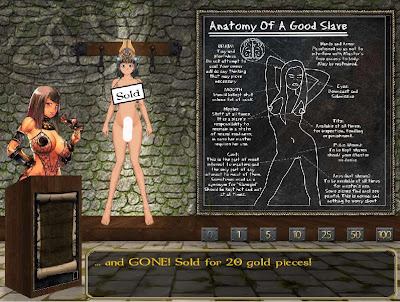 Just about a finished mock up... I know you can't see it but she has pubes. Docclox and Zero_Profile have been working hard on getting them up and running. Go Team! Also new buttons to match the decor. Got to admit I like the overall really adding to the auction feel rather then a static buy screen.

Zero_Profiles new bodies are up on his thread on the board.
Go check them out.

Ambassador Mir of Clan Seed ~ The youngest member of the embassy she was more or less forced to take the role of Ambassador because no one else would. Raised on a spherian world this is her first time ever visiting a barbarian world, it is also the first time she has ever seen a man. She would prefer not to deal with the local barbarians and usually puts on a cool appearance of indifference to anything. Inside she is almost in a state of panic and is completely unsure in all of her actions.

Dr. Unamed of Clan Seed ~ There is a doctor of science, who is both in charge of monitoring the Rift, but is also in charge of the medical details.

Security Officer Unnamed of Clan Seed ~ In charge of the embassy security, also the spy master.

A minor clan of less then 20 sister wives. The majority of them are now part of the Spherian Embassy to Otherworld. They wish to rank up the clans status quickly, through any means possible. They own a garden planet and the embassy staff normally commute back to the planet each night through a DOOR. They are a young clan the oldest member only a 5th generation member of the empire.

Daisy
Posted by Daisy_Strike at 3:08 PM