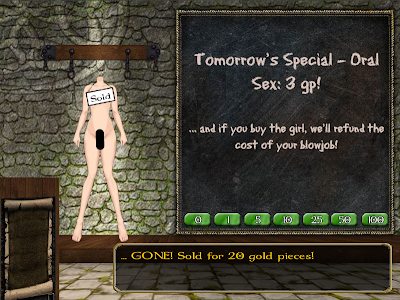 More of the headless slaves mock up showing the sold screen... If you don't get the joke here well its not my fault. Docclox has been working on these changes still just a mock up but still I definitely think he's onto something. Also Zero_Profile's new bodies are in testing.

I finished converting Mio going to go start on Mugi sooner or later. Will allow adding of new slaves and a walkthrough for creating new slaves as soon as we get all of the new body defaults set up. Still a lot of the older girls to be converted over to the new format as well.

Irrbloss was nice enough to write up some rules for submitting quests. And I want to thank him for that but I also wanted to talk about the one rule that I had to add and that's dealing with player dialog.

Otherworld, in my mind, is a first person game. You are actively making it into the game that you want it to be rather then a game on rails where you just passively observe like a visual novel. I want to show an example.

The player is playing a harem route and is trying to create a love slave harem. Quest dialog then has the player to say "A little pain here, a little whipping there, they will be obedient little sluts and fear the master." Just put words int he players mouth that are completely out of character for his/her/it's goal.

Same scenario player is playing a harem route and is trying to have a harem of obedient broken slaves. Quest dialog then has the player saying "I love my slaves, and make sure there all perfectly happily as my slaves."

Same goal, different ways of playing it. Trying to put words in the player's mouth then creates where the player and the in game player are of two separate minds. And that irritates me in most games. Docclox has suggested and used a great work around and that's using the assistants to voice comments. This allows conversation but still isn't putting words in the players mouths. And the personalities of the assistants are becoming reasonably well designed.

To all the writers out there, I hope that made sense.

Daisy
Posted by Daisy_Strike at 6:18 PM