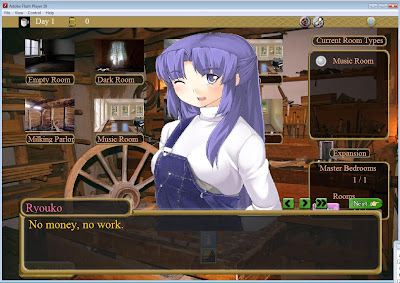 Hmm... may have to fix the Ryouko image with a little padding she looks fat. Anyways carpentry is done, sort of. Everything works and one of the things I have been wanting to fix for months is now fixed. Rooms don't have to offer rest as a default. Up until now rooms were required to have rest as a default or else the game wouldn't know what job to put the girl in if the room changed. That has been fixed so the girls no longer are allowed to sleep in the dungeon.

Now I said that carpentry is done sort of its because now I need to re-do housing again after I just redid it about a month ago. It's a minor change but I'm removing it from a seprate .swf and as part of the shop .swf to make it more in line with the theory that we can have hidden or secret stores or stores in other towns. I always hoped to have 2 more towns, the elf city and a port city at the poles. Anyways shouldn't take to long to make the change and then I'm hoping to do required rooms for certain houses.

I need new anime. Getting desperate about to break out the childrens anime and the stuff from the '80s. So if anyone has a recommended recent, COMPLETED, series. Please suggest it! I have been going through a series ever day for the last month and just am out of new stuff. So please recommend some stuff. --- CLOSED OUT OF HD SPACE

Daisy
Posted by Daisy_Strike at 6:17 PM