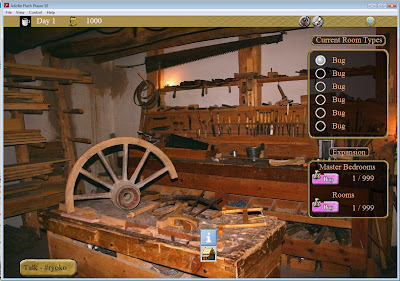 So as you can tell the page has been organized a bit and looks a little better. Changed the radio buttons to make them look a little less ugly.

Speaking of the radio buttons I built a class to build and support them. Which I'm rather proud of so going to put it up on pastebin. I'm sure someone out there will tell me I screwed it up but it does everything I need it to and returns the button position.

XMLing the rooms today, then building a system where houses require or can not be upgraded to certain room types.

Moving on got a request for live streaming... I really don't think people would find coding that interesting. Have watched Fenoxo actually do it a few times and well... was un-impressed. That's not with Fenoxo I pull his game out probably once a month to look for new stuff. I was just un-impressed with watching coding... I mean its coding... But may still give a stream tonight a try I built a channel and tested it out. (Thanks Tyrranus for the assist.) Just for the hell of it. Thats assuming something is on tonight worth watching and programming at the same time. http://www.livestream.com/otherworldtv I don't think this will be a regular thing.

Daisy
Posted by Daisy_Strike at 5:34 AM