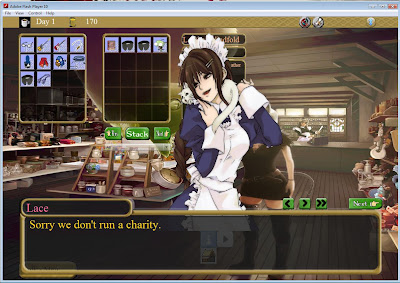 So added a bunch of options for different room messages, such as no money or trying to sell a quest item. The correct person will appear based on the xml of the shop and you can set a message or just let it go to a default message, while still displaying the right person... that may need to be tested more.

Also got off my ass and did something I had been contemplating for a few months and added a button on the top menu to reload all the xml. That way some minor change in xml outside the game can be made with out closing an reloading... though it will reset all of the game made variables. Also only did the xmls I am working with will add the rest slowly as I need them.

Reasonably productive night. I need to really start working on the new sorting system and a few other fixes, such as items for sale appearing in other rooms that don't sell stuff.

Daisy
Posted by Daisy_Strike at 4:26 PM