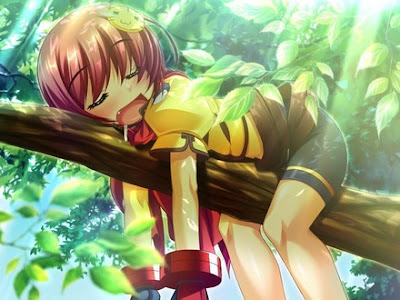 Haven't touched skyrim in 3 days... Instead powering through my x-mas anime purchases...

Possible spoilers... but i don't think so...

Needless... was needless junk. It is hard to do Psychics right, very very few actually do it well. Needless did not pull it off. Also the fact that people constantly come back from the dead, irritates me. I think it would have been an okay story if they removed all the men and just had the females fight it out. They at least had potential but the coolest of them a psychokinetic doesn't even get to fight/bounce in the entire series. But the guys just keep duking it out and dying and then coming back to life. C

Samurai Harem... Excellent packaging confused me to the fact that I had seen it before, under its Japanese name, and it was crap before. Not much to say about it really the harem was actually uninteresting which is sad. C

MM... So far the best of the lot. Though having a masochist male as a main character was a little eh. But the harem was solid. The scenario was also fun. The main character never hit super annoying which was my worry with his super masochism. B+

Xam'd... Only about 2/3 through with this one sure I will finish it tonight and so far. Such great potential bogged down by way too many characters and not enough action. I had really high hopes for this one, and the main character has only xamd 3 times in 16 or so episodes. I expect a bit more ass kicking in what is explained as an action story. B- (Tentative)

Daisy
Posted by Daisy_Strike at 9:13 PM