Finally got the new event system to work in the actual game. 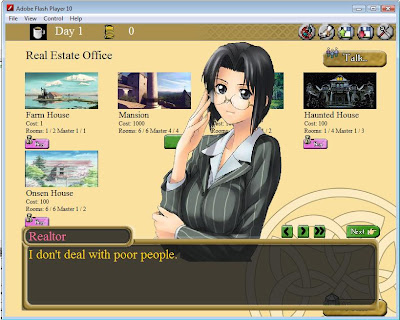 Oddly enough if you don't load the events into the game the event system won't work. Only took me an hour to figure that out, I just kept thinking the listeners in the buttons weren't working... they were working fine.

As for the image above that is just some nice price checking. The best part is one line of code shows the message and pulls it from xml.

the xml is pretty straight forward as well...

note that just about everything is replaced... the name and the image. That means easy updating or changing later on.

Tonight fixing an infinite loop if you hit the fast forward button... seems to be related to the float system. Working on the top menu.

And finally a question for everyone... I'm thinking of making the quest book a separate .swf... would you guys like it to be a book that floats on top of every screen? Or just accessible from the main screen like it is and its own screen? Don't know if I am explaining this well... 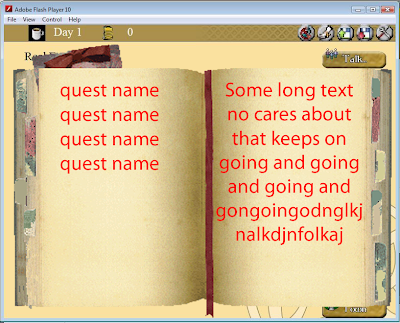 A quick mock up of a floating quest book. Either way going to have to re-do the quests to allow for xml adding otherwise an event system is rather pointless...

Daisy
Posted by Daisy_Strike at 5:56 PM