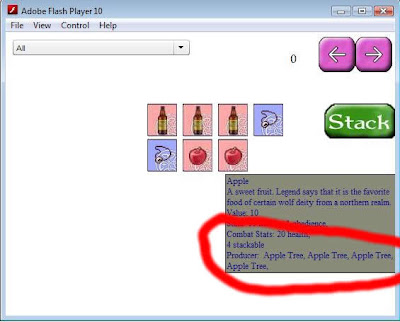 Okay what I wanted to show yesterday, but had a few technical issues. And not sure if I explained the issue well.

So I have an array of player items.

my [apple object] has

We send my [apple object] over to the image builder and it makes an apple but got one problem. I can't add an array as a tag to an image. Not sure why but it did not like it. (this would still be an object as far as flash is concerned but) i'm going to call it [apple image] what I can do though is add the rest of the properties to my [apple image]

So then when I mouse over my [apple image] I get most of the information except I don't have the producer array. But because I sent in a unique IDNumber and what array the item is in IDArray as a pointer... I can just go look.

The actual code which does have a bug I will fix tonight. (The girls crash it because they can have nulls in there array, easy fix took me a while to figure out.)

I'm sure there is a better way to do it, but if your making suggestions please use small words and examples.

Daisy
Posted by Daisy_Strike at 3:45 PM