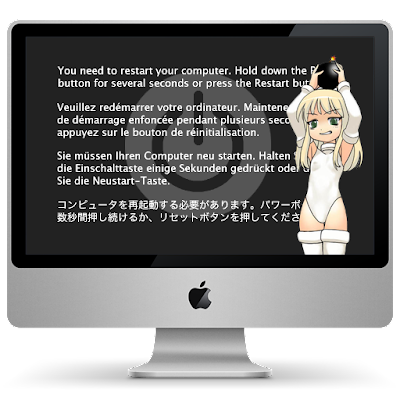 Nothing to do with anything... just my hatred of Mac Users continues. Bunch of Yuppies who have no idea what they bought except that its like an Iphone so it must be cool to bad it doesn't do anything. For them having less then 5% market share, why do people keep thinking that companies will have tech support specifically for the stupid mac they just bought that doesn't run there software or external devices. Oh and setting up there e-mail client makes outlook look simple. Flash is good stupid mac people.

Rant off, offtopic off, back to normal stuff...

I have been working on a FAQ for a while for *cough* interesting *cough* questions, for a little while. But trying to answer FAQs that you write that you write yourself doesn't help much so how going to open it up and maybe I will answer your question. If I ignore your question, their is a reason.

Why does everyone speak the same language?

Translator Microbes. (See Farscape) Everyone is still speaking there original language but they hear everyone's response in there native language.

What language do Spherians Speak?

What language do humans speak?

How much does the average person make about a day?

How much does an average meal cost?

1-2gp Food is always a key resources more then money, for some who just trade and work for food.

Do most people own ?

Not really mainly if you make 5gp you can build up enough money to purchase one but then after feeding them your back to broke.

Well what about housing then?

Go carve out your own home from the green is free as long as its not claimed (most people build conclaves for protection). City housing, you either carved your own spot out already a while ago and held onto it or payed a pretty penny for it. It's definitely in this aspect where strength, skill, and insanity are the keys.

it rains everyday, and I mean everyday for about 15 minutes at around 2am. Plus there are lots of "natural" springs everywhere, almost as if they were set up to water a large garden.

There are some risky farmers trying to grow plant fibers to wear, but with food just barely being in surplus cash crops are looked a little down on (but still make good money.) Animal skins from the pit and the green are common. As well as what ever is pulled out of the pit.

So where does the Gold for GP come from, there isn't any heavy metal, and there can't be enough gold coming through the pit?

Quiet you. Logic is not allowed.
Posted by Daisy_Strike at 3:31 PM