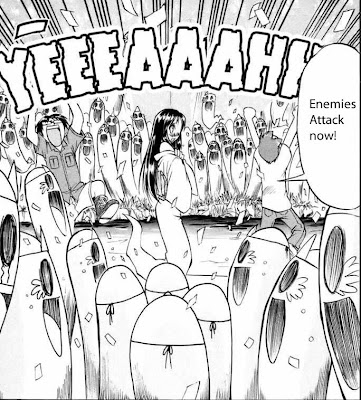 Got the elemental system up and running to damage mods to my satisfaction. It will need some balancing but it was just math to begin with.

Then I had a bright idea. Why not let the enemies use the same attack list as the players or to be more accurate lets call it a master attack list. Which creates a huge amount of options. Basic attacks can be used by both players and enemies. Enemies can have multiple different attacks. Which is cool and that can all be xml loaded.

Lets take a look at the big picture for a second if you don't mind or the goal. Yuki wants to create a quest that includes exploration and fighting. Docclox has been working on an xml loading event and quest system so with no programming experience Yuki can create an event that leads to a dungeon. The dungeon also requires zero programming as it is all xml driven as well. At that time the dungeon enemy list, treasure list, and event controller are all added by xml. (theoretical I will probably get bored with the combat tester and move over to this in the next couple days.) And then why wandering the dungeon a random encounter and the game knows which enemies fill the dungeon, we already declared it and there difficulty.... Those enemies is specific for the dungeon can all be added by xml including there attacks the animation of the attacks. It sounds like a lot of work. But that 0 real programming. To build a huge amount of content. I think that's cool and is one of my goals.

Daisy
Posted by Daisy_Strike at 3:00 PM