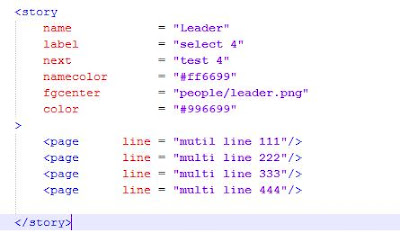 Finally figured out where my OBO error was and oddly enough it wasn't an OBO error it was actually that the next label had disappeared in a multi line case. So forward now works. Now the rewind not so much and I'm actually re-designing rewind all together. The old rewind went label to label backwards just like it went forward. This had a few problems, mainly it required a label to go back, so if the game pushed an event like a class change or an effect being gained that wasn't saved. It also had hugely complicated logic for the multi line... I probably could have figured it out maybe. Or go for a simpler plan and why not just make an array of the previous text to cycle through? That way we just keep a independent record adds a lot easier control too if I ever want to do a pop up screen to scroll through all the previous text. Right now I am limiting the memory to about 100 lines but thats a single constant that can be changed based on what game the text system is being used in. Either way its interesting and broken at the moment.

Daisy
Posted by Daisy_Strike at 5:01 PM