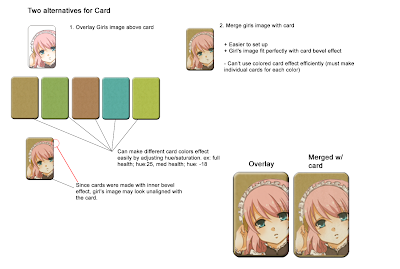 First off Redcape has shown expanded on the cards with his own layering version, a bit better then mine. I'm definitely thinking that the cards are the way to go but how there layered out on the screen might be a bit different. Keep the discussion going.

A quick note about the assistant's text I've added a few new events that weren't in my original plan. Milking a few days ago and now BJs if the girl is wearing a chastity belt while trying to make money. There updated on the list, I also want to thank docclox who has been working hard on a better format for accessing this text. Also I want to thank everyone who has submitted text. Go check it out here:

bug - girls are losing their virginity even though they're wearing a Chastity Belt. - fixed at removeEffect()- would really like to know though where it is taking place so I can fix it there. - thanks to mr. anomonus when a girl is out making money and has a chastity belt on she can only use her mouth
divided the assistant.as into 4 seperate .as they were getting to long to keep together
bug - After combat, the girls lose everything they're wearing. - hmm yes it is but only for one of the two girls - nope take it back its both the girls brough into combat - ah its the class change after combat that is stripping the girl - ah the combat girls were being sent in but it was asking for whatGirl - fixed
bug - When a girl has both classes filled, and you are prompted to give her new classes, or pass, the game locks up, and you're unable to click anything. - hmm When I messed with another portion of this it appears fixed now unfortunatly the replacement text is now being put on two spots... -
bug - nevermind okay this is crashing as well appears to be an item is being placed and then crashing the game - okay this occurs after eating a lotus blossom and then passing - SOAB okay the passed skill wasn't an array it was just a null, what the hell was I thinking - added arrays to every girl - fixed
bug - lotus blossom text was too long - fixed
bug - the text box is a bit to big - fixed
bug - Sakura: She can't be given a maid uniform either (posted about plugsuit earlier) - Sakura has been updated before this and fixed
reported - If a girl starts with cow girl when purchased, she seems to automatically lose lactating the next day even when using multiple gems - girl start as cow girls?!?.. they shouldn't be - and of course they would lose the class girls who stop lactating stop being cow girls... - I don't see how a girl can be purchased as a cowgirl double checked the code doesn't look possible - More Information needed
reported - After 3-5 rounds in the arena, I put my mouse over the various help boxes on the character selection screen. (I'm not sure if it was the amount of arena rounds or the mouseover which did it) But afterwards, I couldn't fight again on the same save because it said "Please do not use items on this arena" or something among those lines, even after I exited arena and passed the day. - interesting thats the text for the walkthrough - think this might be an issue with saving and has been resolved I double checked the variables and it should be fine - added another place at the end of combat where the variable is set to true again will hopefully fix the issue - unable to reproduce
reported - Tatoo: Whenever I give a girl a tatoo (dragon for example) the tatoo is given to the girl, but also added to my inventory (icon identical to the one placed on the girl). -unable to reproduce
bug - If I 6 girls, and go to arena, I can't select the 6th girl. I can only select any of the first 5 girls. I also see a "I screwed up" message when I hover over the 6th girl.I can't select girls from column 2 (middle column) and column 3 (far right column). *Confused* This got fixed by restarted otherworld, I'll keep an look out if it comes up again though - another reusing the same label disaster that will be fixed as more and more of the game goes to instanced version then recycled version of labels. - fixed
bug - 1. if i place nipple rings on a girl in the forge i cant put normal ear rings on her after i have to remove the nipple rings put the ear rings on than replace the nipple rings (the costs a bit of money but i had alot at the time) - same bug different report - I am unable to equip earrings or clit ring after equipping nipple rings. They can not be picked up and drug over nor can they be double clicked on. If I remove the nipple rings I can drag them to the right spot. Also if I equip amethyst earrings on the nipples then I can equip other earrings and the diamond earring in the nipple spot, It is just while I equip the nipple rings. It doesn't matter if I equip just 1 or 2. This happens with Every slave I have tried it with.- fixed sort of click placement now works - drag and drop not so much - really I need to spend a month or two redoing items - but not now
bug - If I buy 3 girls of the same arch type with icons A B and C in that order, and sell icon A and/or B, then buy 2 more of the same arch type again, the first girl I buy will have icon A and when I buy the second girl she will be given icon A and the previous girl will lose her's. Every time I buy a girl of that arch type the girl I bought previously will also lose her icon. If i sell icon C however, everything goes back to normal. - confirmed - added sorting algorithm - fixed


Daisy
Posted by Daisy_Strike at 3:44 PM