Next up in our whirl wind of events is changes. So the check we had succeeded. The event is running, give most circumstances something has now changed. The player has a shiny new item. The girl has gotten sick. The player has advanced a quest. The girl has added a few stat points. The options are just about limitless since you can change both in game variables and ones you made on the fly.

There are 5 types of changes:

As you can see they basically the same as the checks, except for evequest and not really going to get into that one here except that it does exist at its basic set up.

Some examples... The Less then and greater are removed so it will show up in html.

that’s it will remove 33 health from the girl

will make a girl an arch not that these are all going through variable replacement.

This changes the girls health and subtracts an inline variable of fatigue 33. The reason we have to use the check is because it has to know if it adds or subtract rather then just making the variable positive or negative or true or false like in above.

An example of a class raise this is why you use replacements rather then actually doing the log method as that way you don’t mispell one and crash my game.

The mult system is used to factor changes based upon girls skills. That way cleaning can be based on the girls skill as well gold made whoring.

You can now do if's in evechange to allow for easier changing of variables with out event redundancy. Be advised this is pretty simple and that if you find bugs report them. Uses the evecheck system so it should work fine in all cases... should. 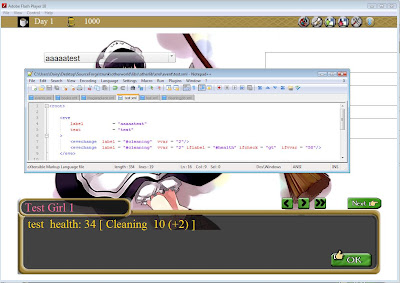 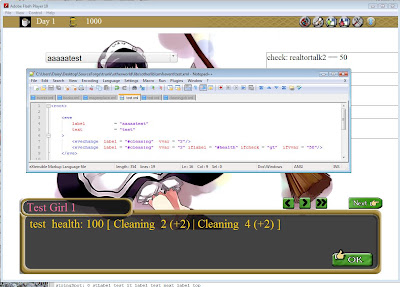 Force Variable into any number you want immediately.  Not addition just an equal force now!  Because it's eve math it happens before CHECKS and CHANGES!  Nothing else is going to work in the evechange if forcesetnow is set to true.  Only works on xml made variables (on the fly) at the moment.