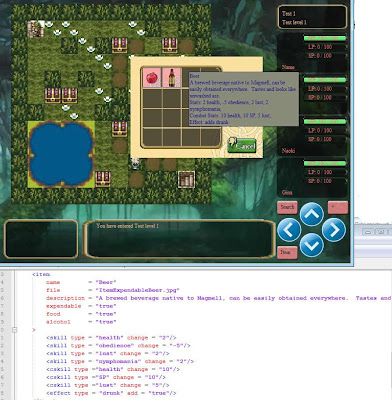 Been working on an xml item system. One of the reasons I probably won't have the explorer in the next update. It's using a new item system as a test, that will probably be the standard in the version after this. Basically, items are being moved to XML, which means that if you want to add an item and share it with the community should take you about 10mins... give or take how fast you are at making images. Obviously that is a bit of a divergence from the current version, so I'm small testing it and building it around classes, which means I can test it in pieces like the explorer and combat. And it seems to be working so far. Can Drag and Drop, float text, the usual stuff.

In other words playing around with stuff that won't be in this release.

Daisy
Posted by Daisy_Strike at 10:39 AM