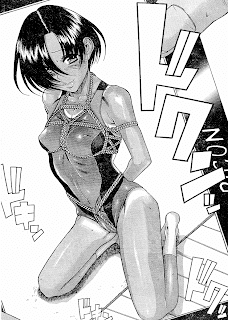 Today's Mio, another maid cafe image with tray. This image was a little bleached out which made it a bit tougher to clean.

Chapter 11 of the second series of Nana to Kaoru came out. If you don't think Tachi looks sexy like this, your reading the wrong blog.

If the green was always part of Otherworld, or something that fell into the pit no one is quite sure. What everyone knows is that it is a constant battle to keep the city from being over run by the jungle. The green is everywhere though and it is easy to tell what part of the city you are in by the amount of green, only the highest of nobles can employ enough slaves to stop the green and push it back altogether. A lot of the slums are just this side of the jungle.

Many other rumors surround the deep green, many monsters have escaped the pit and the watchful eyes of the guard into this deep jungle as well as many slaves. It is a lawless area that surrounds the town and the pit. While not as dangerous as the deep areas of the pit, it is still to be feared. Rumors also abound of a slave kingdom, an elf kingdom, and a fairy kingdom all hidden in the green, though most people discount such rumors.

Finally there is the dreaded Green surge, a sudden wave of growth that can devour an entire block of the city in the night. No one knows what can trigger a surge, but you can go to sleep and the next morning wake up in the middle of the jungle.

Daisy
Posted by Daisy_Strike at 5:44 PM