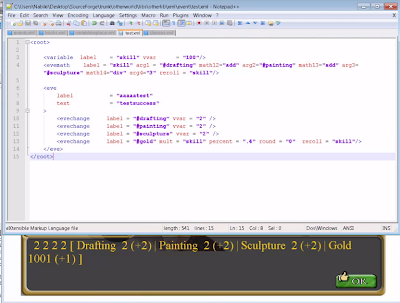 Still cleaning out Rudi's collection of bugs.  The reason btw he is finding all these is because he is really trying to press the system hard.  The xml he wrote up for the whore class is going to be a delightful surprise for all those old time players.  It does so much more then the old version, and adds a whole new dimension to the game.   This level of modding is what I was going for with the new event system and I'm really happy to see someone trying to max it out.

Bug fixed that was causing skills to not update correctly.  As a matter of fact they were updating just insanely as the class was updating not the skill and no one noticed...  That's fixed.

Also added a new feature to evechange that will allow it to reroll a specific evemath.  This is a nice feature if your trying to asses stuff like gold made or cleanliness on the current just learned skills rather then the old pre-change skills.  I'm sure it will also have a large number of other practical uses.  The systax is simply reroll in both evechange and evemath.

Now the only bug I know of specifically is the generics not working correctly... will play with that one in a day or 2 when not at work in worksafe mode.  If anyone else has found any bugs with the event system please tell me.

Daisy
Posted by Daisy_Strike at 1:55 AM